This was tough to find because the "tasting room" is actually inside a restaurant called "The Haul" - with no signage for Connor Fields.  We trusted GoogleMaps, though, and went in to be pleasantly surprised by a bunch of taps.  The beer was really good - an IPA for me and a Cream Ale for Doug.  If we were beer snobs, we'd probably note that both beers were served in the entirely wrong kind of glass, but of course, we aren't beer snobs.  We didn't have time to try the food, but the wood-fired pizza looked really good. 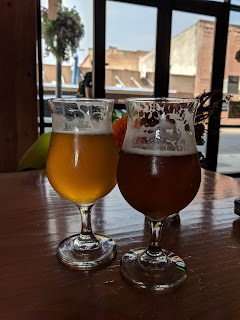 The patio here was one of my all-time favorites!  Its all in the shade, with a little creek running by, and little white lights overhead.  The beer was good, the service was spectacular.  We went twice - once on the motorcyle just for beer, and the second time for dinner after I went for a massage.  Doug loved his burger; I wasn't a big fan of the Brussels sprouts appetizer (and you know how much I love Brussels sprouts!).

BTW - we learned here that the official motto of the city of Grants Pass is "It's the Climate", because the Rogue Valley has a Zone 7 climate, which is marked by hot, dry summers and mild winters.

I don't have a picture of this one because my phone had an unfortunate incident with a garden hose prior to backing up all of the pictures on it.  😩

This was a small little brewery around the corner from Climate City.  The bartender was also the brewer and the owner, and looked young enough to be my grandson.  We were the only ones in the whole place, despite as it being hot as hell outside and air conditioned inside.  The unique thing here was that there was a big leather couch in front of a big screen TV with Nintendo/PlayStation gaming consoles.  I guess that's what this generation wants while they drink beer.  (Wow, I sound like an old lady....) 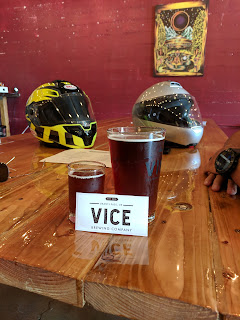 Wild River is a local chain - there are 5 of them in the area.  I typically don't expect much from a chain, but this one had great beer and pizza.  We actually went twice (but only because it's really hard to keep track of which ones we've been to!).  I thought their IPA was really good, and Doug was pretty darn excited about the ESB.  The pizza was thin crust, wood fired, and cut in neat little squares, all of which made me happy.

No pictures of beer here (they drowned with my cell phone).  But, Doug took a picture on his phone of the pizza (because - linguisa!).

This is a small little brewery in an industrial area out by the mall.  There was a huge dog-friendly backyard with lots of green grass and lawn chairs (which you could only access by walking the pups through the middle of the bar).  They were setting up for live music while we were there, and by the time we left, it was hoppin.  I met Doug there with the pups after our Harts Trail hike, and we were all very very thirsty, so the beer was especially good.  Favorite thing:  the sign by the dog poo bag dispenser that said "only YOU can prevent poo piles!"  😆 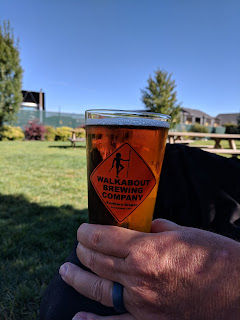 Another tiny brewery in an industrial park.  No patio, but the inside was dog friendly and we got lots of kisses from an adorable goldendoodle (we were on the MC, so no pups of our own).  The beer was good, and all made in-house.  They also had several local wines on tap, which was a nice touch.  There was sort of a military theme (gas masks, a beer named 'blast radius', their motto of 'embrace the chaos'), so I asked the bartender.  Turns out, its not military themed, but apocalypse themed.  They used to be named Apocalypse Brewing, until they were sued by another brewery and had to change their name.  Damn lawyers. 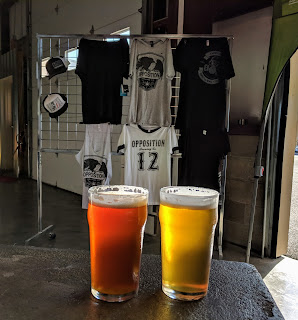 Right in the middle of downtown, in an old car dealership building, this one tries to be upscale, but falls a short.  There was a nice dog-friendly patio with picnic tables.  The first time we went, we were on the motorcycles, so no pups; we went back with the pups for Doug's birthday dinner, during which Finn alternated between being scared to death of the sound of cornhole being played in the parking lot to not being able to control his wiggly-but every time a server walked by.

Beer was acceptable, but there wasn't much of a variety.  We both had the Pale Ale, which was similar to a Sierra Nevada - kind of down the middle for both of us.  I didn't think much of the food, but Doug enjoyed his burger, and the pups reported that their french fries were good.

No pictures here either.  Damn phone.

OK, its not a brewery, but the only way I'll remember it is if I write about it here.  This was an amazing little cheese shop down the road from the Medford breweries.  The guys working there were actual cheesemongers who could rattle off the flavor profile of every cheese in the cave, and graciously provided samples.  I opted for hunks of smoked gouda,  "earthy blue", and hopped cheddar.  Really really good quality cheese (and a neat sampling experience).