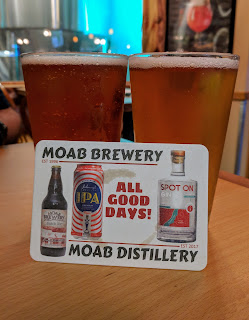 We had been here before - back in 2008, before we were so skilled at hunting out breweries.  It's still the only brewery in town, and I guess its got that going for it.  But we were underwhelmed.

The beer is average.  So average that we didn't even consider getting any to go.

The food was below average.  They had a decent vegetarian selection, but it wasn't very good (at least the hummus wrap wasn't).

If you're in Moab, I'd say you should skip the Brewery and head straight to Eddie McStiffs.  It isn't a brewery, but they have lots of Utah and Colorado beers on tap and the food was really good.  Doug got a BLT that had a "schmear" of egg salad.  I know, it sounds gross, but it was really pretty awesome.
Labels: brewery-reviews, UT
Newer Post Older Post Home