Bushwhack (defined):  to clear a path through thick woods especially by chopping down bushes and low branches.

We didn't set out to clear our own path.  On the map, it looked like we could make a nice little loop by connecting the Dallas Trail with the Corbett Trail.  I researched all the trail reviews for both.  I programmed waypoints in my fancy-schmancy new Garmin.  I even brought my ex-commando husband along for navigation support and first-aid if necessary.

My research concluded that the best way to do this route is to ascend Corbett and descend Dallas.  The first couple of miles were great.  Beautiful views in all directions.  Dry or well-packed snow-covered trail.  Weather was sunny and warm.

Then the footprints in the snow ended.  Just ended.  In a beautiful white birch forest covered with sparkling virgin snow.  Both Garmins showed the trail right there.  Well, almost.  Maybe it was just right over there.  No wait - I'm sure its right over here.


Now, we could have just turned around and retraced our steps back to the truck.  But what kind of adventure would that be?   None.  No adventure.

Besides, this was a great opportunity to re-blue my land navigation skills, and even learn all the features of my new Garmin.  What could possibly go wrong?

So, right there in the middle of the woods, we had a little "Land Nav 101" refresher course.  Doug asked me which direction was south.  I pointed north.  Doug asked me which way the contour lines on the map showed us going up.  I pointed down.  Then I had an "a-ha moment" - my gut told me to walk up the little hill to the left (east, west, whatever) and I'd hit the trail.  Of course, I was wrong - there were just more stupid birch trees.  I was starting to have flashbacks of my epic failure on the Land Nav course at Ft. Benning during OBC (without the thorny bushes, snakes, spiders, and the dark of night).

Doug (as usual) came to the rescue with his mad navigation skills.  Except that ex-commandos apparently don't follow trails - they bushwhack.


Then the wide open birch forest turned into a dense evergreen forest, with downed trees, man-eating crater-holes, and slippy-slidy chutes.  We spent plenty of time on our asses, sliding down down down.  I kept obsessively checking my Garmin and worried about all those smushed-together contour lines - because I know that means a cliff.

And then - BOOM!  We popped out on Dallas Trail.  With all body parts intact and both pups still romping along with us.  And that, my friends, is why you always bring your ex-commando husband along on bushwhacking adventures! 😎 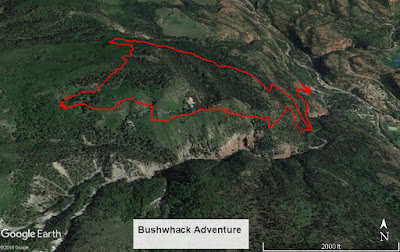