Even though Mookie didn't meet her #kittygoals in the tall pines of Lake Easton, we headed to Seattle last Monday.

Seattle certainly isn't a new adventure for us - I was stationed at Ft. Lewis for a year and Doug's family all lives in the greater Seattle area, so we've spent some time there.

Priorities in order, we immediately made a pilgrimage to Caveman Kitchen.  Caveman is a little outdoor BBQ pit surrounded by industrial parks that, unless you knew somebody who knew somebody who went there once, you'd never discover.  Doug lived literally next door when he was attending UW, and the when-in-Seattle-must-eat-Caveman tradition has been going strong for the Norvell family for 40+ years.

James is the only Norvell who inherited the ability to make the special family recipe potato salad (he claims to have given me the exact recipe, but since I fail miserably every time I try, I'm skeptical).  Whenever there's a trip to Caveman scheduled, James makes a batch of potato salad, gets the Caveman to go, and we bring it all over to Airways brewing, where proper beverages can accompany the feast.


There were no active adventures in Seattle because it was just too damned hot.  Yes, that's right, I said Seattle was too hot ... global warming is real, people!


Seattle wasn't all BBQ and beer.  The night we arrived, Doug discovered a giant piece of metal embedded in one of the RV tires, and later found out one of the truck tires had been shredded by a metal bolt.  So, after 5 trips to 2 different Discount Tire locations over 3 days, we are back up and running (but $800 in the hole).

Done with Seattle, we continued our trek north toward Canada yesterday.  We are using Lynden, WA (where you can see Canada from your living room!) as a base until after our Canada adventures are finished.  It is much cooler here, which is a very good thing because the RV Park we reserved accidentally double-booked our site so we are temporarily parked on the lawn next to the owner's house, running electricity from his house to the RV via a standard (15 amp) extension cord.  Which means no AC and only one fan!! 😰

Today we took the motorcycle to Mt. Baker, which was still snowpacked and beautiful!  I occupied the Princess Seat and let Doug do all the work. 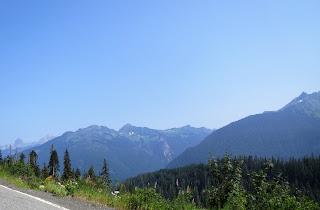 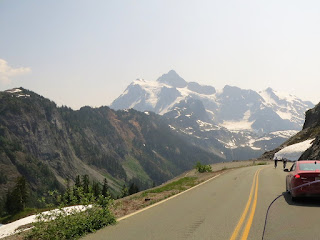 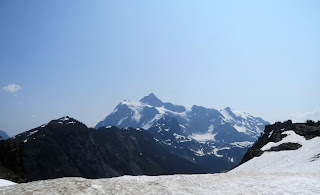 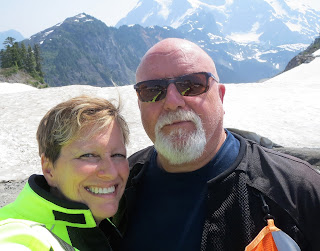 That's it for us for the next two weeks or so.  I leave Monday for a yoga festival in Whistler, British Columbia with the girls, and a few days later, Doug goes on a motorcycle trip up to Whistler with the boys.  We'll all meet up in Whistler and then head down to Squamish, BC together for more adventures.