First of all, it is not humanly possible to visit every brewery in the greater Seattle area.  Don't get me wrong, we've made a valiant effort over the years, but we accept that we will die someday never having experienced every Seattle brewery.

For the purposes of this blog, the only breweries that count are the ones we hit on this trip.  This time, that was:  (1) Airways; (2) Odin; and (3) North Fork.

Airways conveniently allows you to bring in your own food, which facilitates the Norvell Family tradition of feasting on Caveman BBQ.  They have two locations in Kent - one is the production facility with a taproom, and the other is a bistro with a full menu. We've been to both, but on this trip, it was taproom.  The beer is decent, and there's no doubt we'll go again the next time someone has a craving for Caveman. 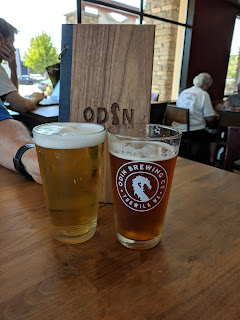 Odin has been around Seattle for a long time, too, but their tap room is relatively new.  It would be a convenient stop on the way to/from the airport, or if you feel the need to patronize the ginormous shopping mall at Southcenter.  The beer was good enough to buy a six pack of the IPA for home.   The food -- a Cuban and a Brat -- wasn't anything to celebrate, but it wasn't terrible.  There are a lot of breweries in Seattle, and I'm not sure I'd revisit Odin instead trying something new next time.  But if we're nearby, I could easily be talked into stopping for a beer.  😏

First of all, I'm sure I'm committing some crime by calling this the "Seattle Area" (is North Conway the "Boston Area"??).  But if you're anywhere near Mt. Baker you absolutely have to stop at North Fork.  In fact, its so good that its worth a trip from Bellingham/Arlington just for the beer.  Doug had an ESB on nitro, which he said was as good as any he'd had in England.  I, of course, went for the IPA and it was really good.  Their menu is limited to pizza and grinders, and we had a slice of pepperoni pizza.  It was SO good!!  New York style sweet red sauce and thin crispy foldable crust with air pockets.  This is a "go again" for sure.