After a long, hot motorcycle ride, there's nothing better than a beer on a shady outdoor patio.  We found both here at Lumberyard Brewing Co. in downtown Flag.

It wasn't the best beer we've had, but it wasn't awful.  The service was friendly and efficient, but we did feel like we were being rushed out of there before we were even done with our beer.  The food was standard pub fare - burgers, sandwiches, etc.  Doug got the burger special, which was a riff on the Animal Style burgers from In-N-Out.  It was good, but not epic.  I got the reuben (the whole vegetarian thing goes out the window when properly tempted).  The reuben was one of the better ones I've had (and I grew up on NYC Jewish deli reubens!).

Fair warning to other dog people - the patio here was NOT dog friendly.  Who ever heard of a brewery patio that doesn't love dogs??  On principle, I should have boycotted it just because of that, but we were too thirsty and the pups were happily napping away back in the RV. 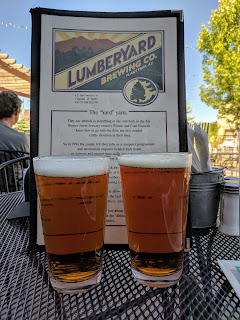