The end of the "have to"s

Retirement is all about "want to" - not "have to".  Well, we had one last "have to" that had to get done before we could really let go:  the storage unit.  Well, four days and 6 trips to Goodwill later, its done.  I forgot to take an "after" picture, but rest assured, it looks much better than the "before" picture in the last post.  (I don't even want to think about the conversation among the Goodwill volunteers when they discovered our donation of a full-size disco ball, 2 sets of crutches, and 3 RV ladders).

But wait - there's more!!  We also took all the extra beds and couches out of the RV to lighten our load.  Several hundred pounds gone and much more room for useful stuff like motorcycles and mountain bikes.

After Doug worked his magic in the garage, we were left with a well-organized traveling toy room! 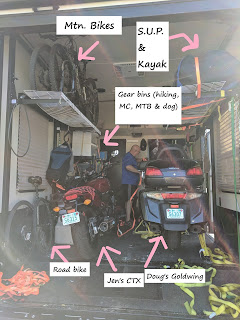 We also did some great walks in "our mountains" while we were here, and ate some good old Western NY pizza from Vinny's (not to be confused with NY pizza, this is the kind you only find west of Syracuse and is properly consumed only after having dipped it in blue cheese dressing).

Jen also got to catch up with some Army friends, and the pups rediscovered their love of chasing lizards and bunnies.  Next up - Tucson!
Labels: AZ, military, travels
Newer Post Older Post Home